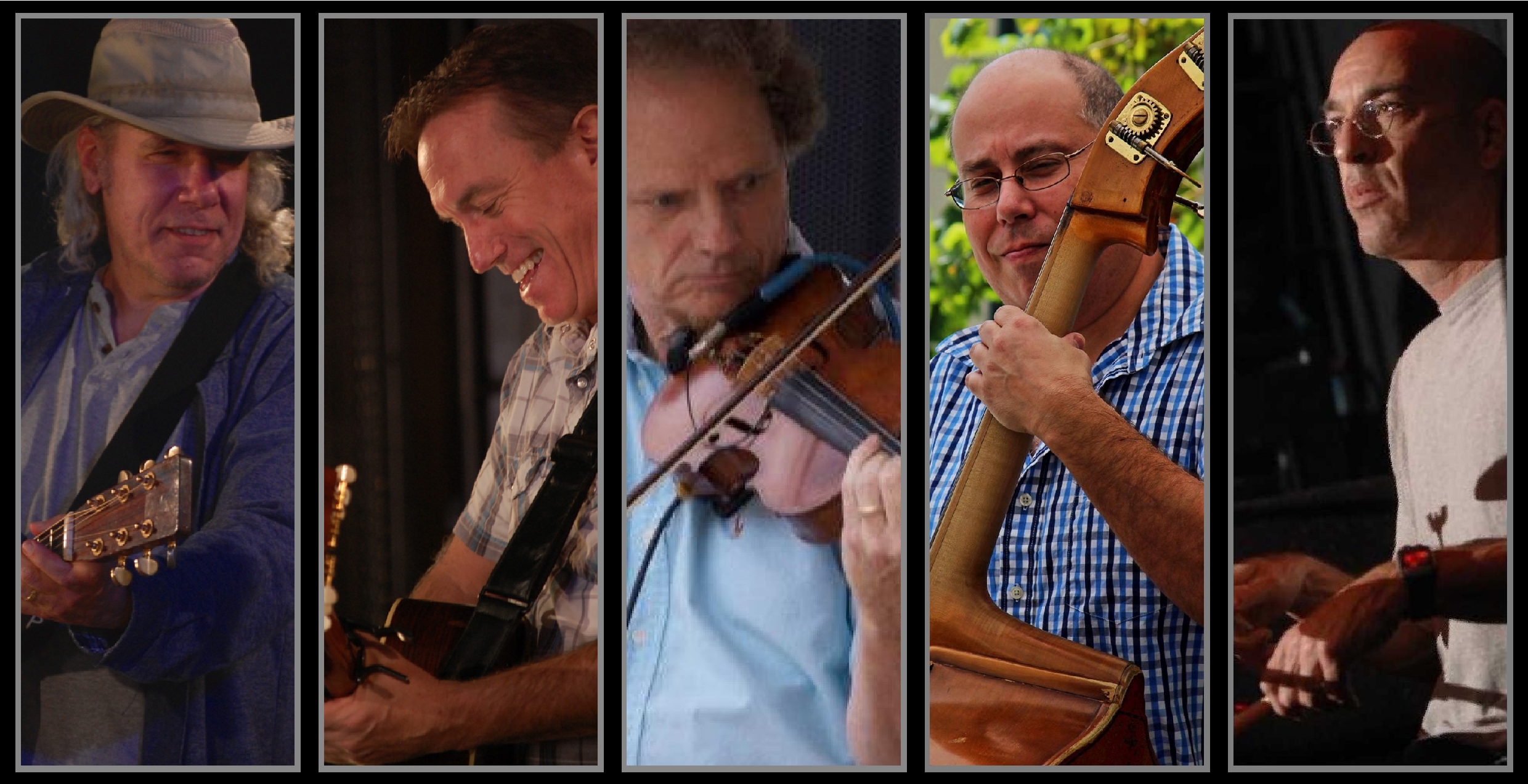 Band mates in the early 1980's and friends ever since, singer-songwriters Matt Douglass and Sam Nitzberg began performing together as a duo in the late aughts, culminating with their collaboration on an EP in 2012, "Grayest Hits." Looking to enhance their performances of their catalog of originals and an eclectic list of covers, they recruited Davis Shingleton and Pat Sheridan to pitch in on mandolin, bass and vocals. After a year of performing and stretching out some arrangements, both Davis and Pat left to pursue other musical ventures, but not before recording some tracks for The Old Part of Town's self-titled first CD, released in the Fall of 2015. Soon after, Matt and Sam's longtime musical pal Steve Raskin joined on drums, along with with John Seay on bass and, on a part-time basis, Marc Wexler on mandolin. Electric guitarist Kurt Hammond then joined the fray for a year or so, with fiddle/mandolin player Brian Whaley coming aboard in 2016. In December of 2018, "Upright" Dave Frieman took John Seay's place.

Before teaming up with Sam to found The Old Part of Town, Matt released two roots rock/Americana albums: No Stone Unturned (2002), and Big Lucky (2008), which garnered Honorable Mention for Best Album in the Mid-Atlantic Music Monthly.  Matt long has been writing songs that range from slow confessional country ballads to stories with a rock-n-roll soundtrack. His guitar playing style is influenced by everything from early folk masters to Ry Cooder to Anders Osborne.
Matt's musical beginnings were with a touring country-rock band, focusing on the musical styles of Gram Parsons, EmmyLou Harris and Rodney Crowell, and sharing the stage with Vassar Clements, Pure Prairie League, Michael Murphey, and Commander Cody. After that were stints in everything from a British Invasion rock band, to a reggae rock band (The Charm City Reactors) to an American rock n' soul band, before going solo for 10 years. In 2011 he placed two songs on the soundtrack to Plank Road Pictures' "Sins Of The Father."

In the late 1970's, after spending several years busking in different parts of the United States and Europe, playing folk and bluegrass, Sam moved back to his hometown of Baltimore. He soon founded The Charm City Reactors, an electric and eclectic outfit which reflected his widening musical tastes and which was a staple in the burgeoning Baltimore alternative music scene for 5 years. The next decade found him as lead singer with a new wave cover band The Sway, before leaving to form The Odds in order to provide another vehicle for his own songs.  Now Sam has returned to his musical roots: acoustic folk and melodic, well-crafted songwriting.

Brian's had music in his bones since harmonizing with his family as a kid, and continues to keep it at the center of his life as a choir director and a piano tuner. A former member of the Southern Rock group the Lost Cowboy Band, singing lead vocals as well as playing electric violin, guitar, and keyboard, he later joined Matt in the progressive rock band Red Tape. From there he moved on to a folk trio called Morning County Sheepshooter's Association, and has released two solo CDs, From Where I'm Standing (1994) and Standing On The Rock (2010).

The newest member of the band, David replaced John Seay in December of 2018. A former member of the progressive bluegrass outfit Smooth Kentucky (along with Cris Jacobs and Patrick McAvinue), David's been a fixture in the jam band world of central Maryland for years, and still plays with many of them. More bio details to come...

Steve first discovered his love of drums and music when banging on pots and pans and anything else around the house at a very early age. He played professionally throughout college and pursued music full time for a few years after graduation before embarking on a separate non-musical career. During that time he also performed and/or recorded a wide variety of music with many successful Baltimore based bands including Total Eclipse, The Charm City Reactors, Two Legs, The Polkats, Sonia/Disappear Fear, The Barn Burners, The Scott Cunningham Blues Band, Big Dog Blues Band, The Mark Brine Band, Gypsy Dawg and Dawgone. Now, he's come full circle, playing again with Matt and Sam, his pals from The Reactors days.